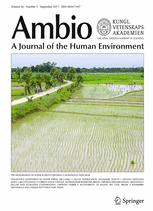 A critical review of water scarcity metrics written by UCL PhD student, Simon Damkjaer, and GroFutures PI, Richard Taylor, is featured on the cover of this month’s issue of Ambio. The article argues that current metrics including those used to track progress toward the UN Sustainable Development Goal 6.4, substantially reduce the number of people suffering from water scarcity by 2030, are inadequate as they misrepresent freshwater resources and demand, particularly in low-income countries of Sub-Saharan Africa. The authors highlight the critical role played by groundwater storage in addressing seasonal or perennial water shortages that is entirely disregarded by current metrics.